This time comes with all the anger and power from “AZTLAN”, the territories where now is Mexico and south U.S.A.

This Latino Resiste breaks Mexican underground scene, which right now, is leading not only a music revolution, but also fashion and even lifestyles.

The Album, entirely donated by the artists,(in the case of M.I.S and Erick Rincon, the songs were grabbed from Free Releases); you will find original releases done for AZTLAN, although we would like to do special emphasis to this releases in terms of uniting the whole Mexican Underground scene, everybody under one shelter!!
You will find from CAIFANES dubstep, or Mariachi drum n bass, to reggae, 3ball huarachero, or Nortec to Mexican rock, hardcore,Dance or moombahcore.

Cholombians, 3balleros, Reggae lovers, dubsteppers, rockers, and so on.. Everybody, every genre is represented at least with an underground artist. 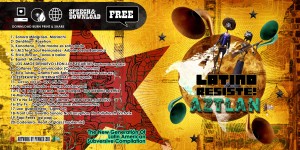 Latino Resiste: AZTLAN art was made by Mexican rebel artist PUNKER, who is also an active member of the Rebel sounds collective.
You will find amazing wallpapers for your computer!!

This is the new sound of Mexico!!
This is AZTLAN roar!!!
Because we are the powerless!!! Mexico Resiste!!! Latino Resiste!!!