This is a work that has taken us more than 8 months, gathering and checking production styles, subgenres, countries, and “creative” skills. But the most important part is that we want to achieve something more important:
TO UNITE METALHEADS FROM THE WHOLE CONTINENT UNDER ONE ROOF, ONE PHILOSOPHY, UNIDAD LATINA!!

There were two main factors why we decided to do this: even though Metal is huge by itself in their own underground scene, rarely Latino Bands make it outside their own countries, and second, there is a “radicalism” between elitists who barely listen different genres except their own tastes.

Having those factors in mind, we started a selection process from Bands from all over the Continent, From Argentina, to Canada, we travelled and listened to hundreds of bands, each one great at their own, so the selection process was very hard.

Because it had everything we needed, great production, amazing sound, but overall, a pure Latino sound: including A FEMALE VOCALIST!!

Our selection included Carcass’ singer (Jeff Walker) huge Collaboration with Dia de los Muertos, but then we changed it to one that we felt could fit better, MALDITO X (from Asesino, Static x) drops his style in SIGO SIENDO EL REY.

Starting the compilation with a song that is THAT strong, we knew we where going thru the right path.
Metal Latino drops 21 tracks, each one represents a whole trend, a whole movement behind, not only the subgenre, but also the effort, production and passion from the bands.

We will drop the info about those 21 indeed, (bottom part of the post) Although some of those MUST BE HIGHLIGHTED, as they represent what Latino Resiste is about. Gathering together well known and unknown people; towards one identity: LATINO UNITY.

Puya/Ankla founder Ramon Ortiz, decided to unveil his very own and unreleased track Resake, a song that blends brutality, virtuosity, and latino roots. 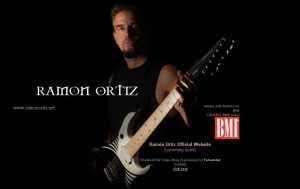 Eutanasia, the iconic band that had almost a two decades hiatus, comes back to unleash all the aggression from 90s thrash death with a 2012 sound. 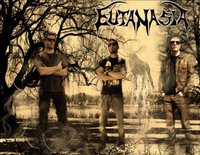 Colombian Headcrusher , Mexican Here Comes the Kraken, and Chilean Nuclear are here to prove why they are ahead of the game in their own terms. 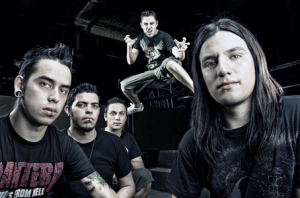 But the real highlights are the unknown for many, these bands which have to sacrifice their own savings to record. Some have only a computer and a cracked recording software, and still can compete with well known acts.

This is also something we want to be truthful. You will hear all the production differences as is.
A unique approach that keeps Metal for the masses, and elitists.

METAL LATINO reveals regardless grindcore, black metal, Nu Metal, Thrash, Hardcore, Death, Deathcore, Fusion, or whatever style you find in the compilation, We (Latinos) have a lot to be proud, a lot to still discover between our own continent, a lot of bands to support, either LIVE or RELEASES, and especially.. We sound as good (many times even better) as American/European bands.

The reason why we haven’t reached further, might be between us. Let’s all unite. Latino Resiste!

With a Creative Commons license, we ensure bands keep their copyright but allow people to copy and distribute this work provided and give them and us credit

This work is licensed under a Creative Commons Attribution 3.0 Unported License.

Art was made by the Excellent Mexican Artist OMEGAZ
whose style brought an incredible fresh vibe to the Metal Scene, by avoiding the stereotypical “calavera” while keeping it dark 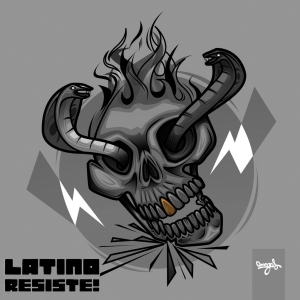 Inside the album you will find Two Wallpapers (click to enlarge)

Now this is How Metal Latino was created:

In August 2011 Latino Resiste opened the spot for a new compilation.
And we had to get in touch with Alfonso Pinzon, who is one of the most relevant Metal Heads in the US scene, whose label Cinismo Records has dropped some of the most wicked discographies.

Dia De Los Muertos, gets two tracks, opening track, and a featuring with Maldito X at number 12. (music submitted by Alfonso Pinzon himself)

Here Comes the Kraken, in the second spot, unveiling all the power of this amazing Mexican band ( music submitted by Tore Rangel)

Headcrusher’s Let the blood run is one of the most aggressive metal releases of 2012, and they easily earned a spot, the difficult part was selecting which song from their album. ( Music submitted by Gustavo Valderrama)

Dar Sangre, Axial from Argentina, and Mexican grindcore Nasty Pig Dick set their albums for Free Release, and they were submitted via blog submission.

DNR Brasil are a extreme band, and they are releasing this song Controle Inativo, submitted by the band themselves via METAL LATINO soundcloud.

Eutanasia, returns after two decades, with a new album called We Belong to the Shadows. ( Music allowed by Walter Tamayo)

Puya/Ankla founder Ramon Ortiz, is perhaps, the biggest addition in terms of “name” to the compilation, an amazing artist whose bands have been headliners in ozzfest and working with oscar/grammy winner Gustavo Santaolalla among more great achivements, but at the same time humble enough to drop not one, but two tracks, and even greater, an UNRELEASED track

Next Spot is fullfilled by Decode, an impressive post metal band, featuring members from La Pestilencia, Agony among many others 90’s metal band. This band dropped one of the best metal submission over all. ( Music allowed by Cesar Botero)

Argentinian Leandro Achinelli’s project Leechmaster, is the closest thing to Opeth’s folk side we found in the continent, impressive song, which keeps all the dark side without losing melodic patterns.

Chilean mega Band, NUCLEAR, who have opened for Slayer, Testament and many more also keep it real and they had no problem submitting their song Defleshed. ( Music submitted by Punkto Sudy)

Mexican Black/extreme Metal Erebus Redemption made their way by submitting a great self produced song called the illusion of the 2nd circle, ( Music submitted by the band itself)

S26 from Buenos Aires unleash a song that represents everything we stand for. if you understand spanish:
THIS IS A MUST HEAR!

This work is licensed under a Creative Commons Attribution 3.0 Unported License.