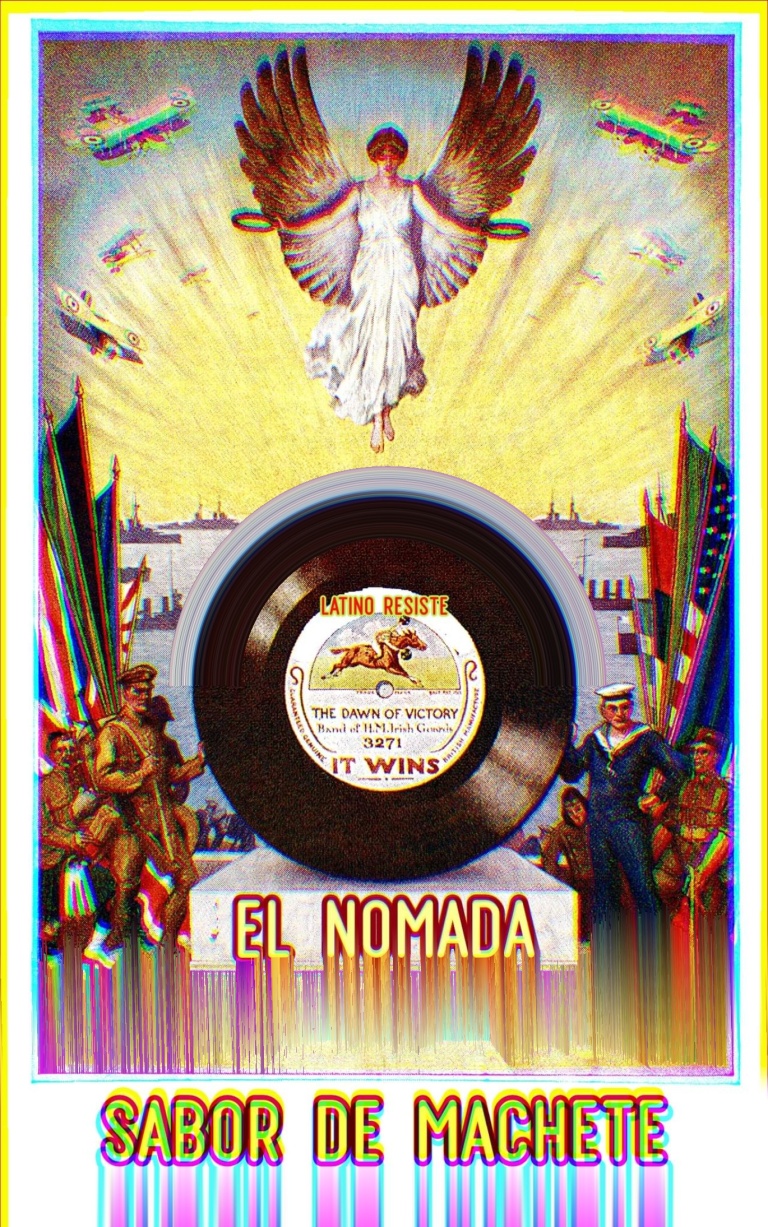 Latino Resiste is extremely happy to finally have a whole EP from one of the OG’s in the game.

Back in the day he created a new genre called Junglaton (Drum and Bass fused with Moombahton) alongside Jon Kwest. However, El Nomada kept evolving the game and actually has gone really deep into the game and making great statements in what Latin Drum & Bass is.

At the time he was dubbed “The King of Drumstep” by UK’s Dj UMB from GenerationBass.

El Nomada is also a pioneer of the moombahton movement in Kansas City, and founder of the Kayceeton guild of Kansas City moombahton producers and overall a real OG.

His latest EP called Sabor a Machete is a brutal statement of what Latin Drum & Bass is. Singer Leopold Nunan and drag queen Pietra Parker take over Beverly Hills with a new beat and a music video about ostentation and empowerment.

Grab it on our BANDCAMP

But PLEASE make sure to check the amazing video where Brazilian Queer artists live out the fantasy of the American dream in new music video  shot on no other place but Rodeo Drive.

Born in Rio de Janeiro, Brazil and based in the USA, recording artist Leopold Nunan who had released a track with us alongside our good friends WILE OUT, teams up with supertalented drag queen Pietra Parker dropping flames on “Ballin’ in Beverly Hills“.

This babe is mix of hip-hop, afrobeat, trap and favela bass.

A bombastic track for the dance music lovers, says Leo. The BEST PART!!!!

track was produced by 16-year old phenomenon, heavy hitter from Mato Grosso, Brazil, Karan! THIS DUDE IS THE MF FUTURE!!!!

This will be Leopold’s 6th single release and Pietra’s music debut. The music video is a marathon of absurd looks directed by fashion photographer Will Cook. The video was all shot in Beverly Hills, on Rodeo Drive and at a private party at a friend’s mansion.

The lyrics were written by Leopold and Pietra in partnership with Z33R0, an East LA Latino composer, queer performer and activist.

We gathered all our friends to help shoot the music video, so we could realize this dream together. “Ballin” production was done 100% independently. There will be also

3 other versions, a techno version by Golden Kong, a riddim’ take by Klean and a arabian trap signed by Klap – curiously all Brazilian producers.

Want to start grabbing the best Russian-Latino stuff before the world cup? Well. Latino Resiste gets you some of the craziest Russian producers that spit Latin-inspired flames to the dancefloor.
Coming from Rostov-on-Don (RUSSIA) our homeboy DUB BEANS unveils his epic Baile Funk turned into lazerbass NA BUNDA as his LR debut.
Following the steps of ATTOXXA, Omulu, Tropkillaz and so on, DUB BEANS slays the Brazilian Bass.
Download this mayhem for #zeropesos

For fans of the early Mal Dicen sound, back to the days when we dropped Munchi & Chito Rock, Rathero, or Happy Colors’ debut EP we knew when production could bear a signature “classic moombahton feeling.”
MAZNOIZE‘s latest single “Traqueteo” does blend the vibes of steamrolling reggaeton along hook-driven bass lines and, obviously, bright synth-chord Moombah progressions.
Thus, it’s a great take of the style that years ago allowed tropical bass to once again emerge to the global scene and now getting popular by Major Lazer, or J Balvin.

Oakland’s very MAZNOIZE has released under Moombahton Central, La Clinica, and many others, so it was just a matter of time he would pop under MAL DICEN.
Traqueteo is a track that’s meant to sound like if you let Tego improvise under a Diplo riddim.
Grab it for FREE release via LATINO RESISTE-related Mal Dicen Records, plus dont forget that greater attention deserves to be paid to MAZNOIZE sounds. 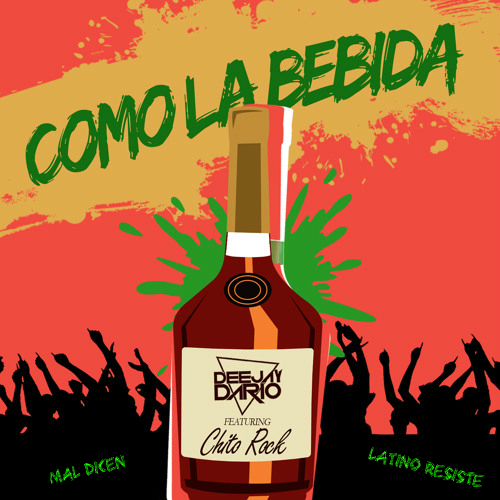 Mal Dicen strikes again with a tropical cocktail from a long awaited collaboration between two of our most beloved artists, Deejay Dario and Chito Rock.
Dario’s beats are always brooding and sultry—almost as if you dropped dembow and baltimore drums sprinkled with layers of tropical techno while Chito Rock spits fire as usual, he sings over those beats instead of rapping. While old reggaeton’s lyrics tended to be hood tales, and idolatry to the majesty of butts, Como la bebida is an ode to having a good time, grab your drink and just put em up!. 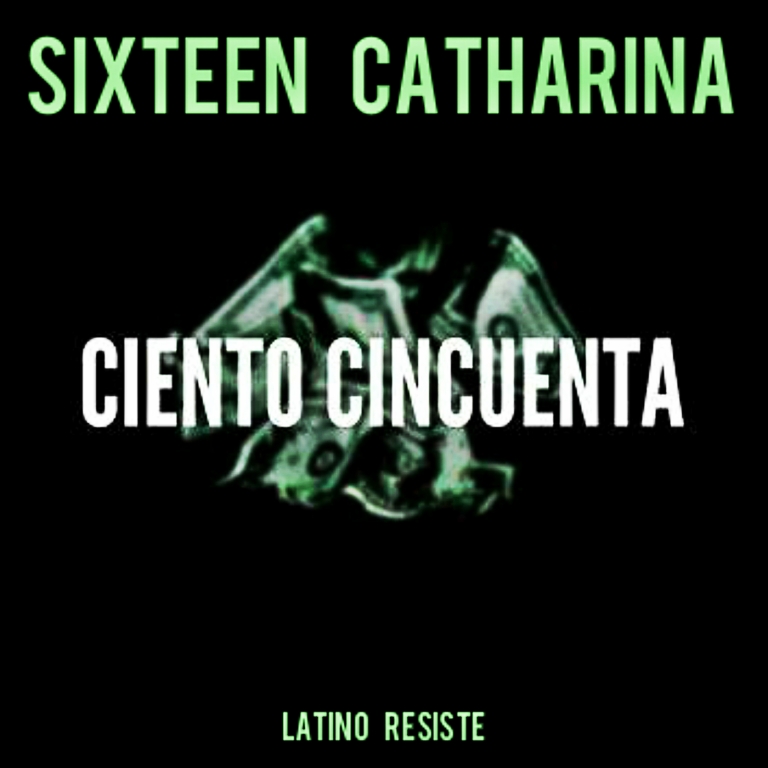 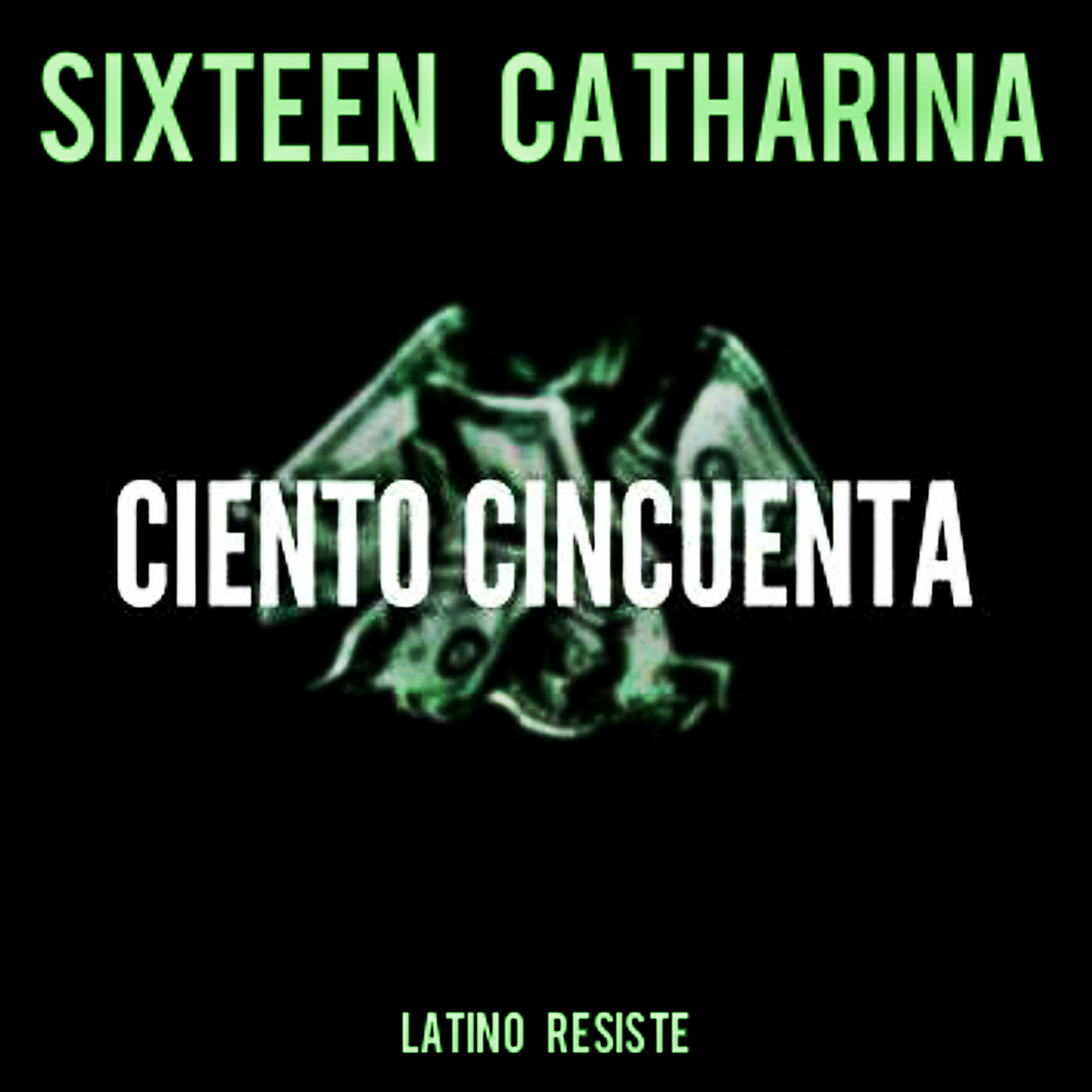 It seems that every track Mexican Duo Sixteen Catharina releases eclipses the prior.
The Mendoza cousins-producers have been getting a lot of attention for skillfully remixing well-known Moombah and bass and very recently being a regular must grab from La Clinica records’ masterpieces. Sixteen Catharina signature sound is a blend of melodic mastery coupled with glistening synth work and buoyant energy that consistently emits cheerful sensibilities.

For their latest Ciento Cincuenta track, they flip the bubbling pace, add as striking bassline and their synth work helps to reach the boiling point on thedrop until their slow-flip dembow hits you.

Caballo is back with his 14th album called LOUD AF.
This time the Colombo-Canadian producer gets back to his bass signature sound, the album features a diversity of genres as well wicked collaborations.
DOWNLOAD THE ALBUM for FREE OR PAY WHAT YOU WANT

BUT.. let’s go to the highlights!! The album opens with Swedish bangeristas AS WE SPOKE on an impressive Dancehall-Bass track called UNU AKS WE

BASS sounds for your mind. Like track number 3: Bounce it Gyal

There are some collaborations that are a MUST GRAB, like the ones with legendary MC ZULU, UK’s grime underground king Hostile, Moscow’s badboy Chuck Upbeat, Miami’s prodigy producer Dav!dx, as well as a rendition to Celso Pina and Erick Jaimez on Cumbia Vengadora.
Caballo doesn’t forget his root as Digital Cumbia Pioneer.


LOUD AF is a multi-genre release, that tries to keep the political relevance for tumultuous times like this one, while creating a very original sound without trying to copy anyone else.

Caballo goes back to his mc duties on cumbia vengadora, and sol negro.

LOUD AF is available on every digital platform as well as the Latino Resiste bandcamp.
If you like these genres: World, world fusion, Ragga, latin breaks, bass, latin bass, urban, electronic.
Then LOUD AF is just for you.

Oroshy is the brainchild of Kin Rocha aka Dj Kin, one of Sao Paulo’s most prolific producers who has getting a lot of attention for his unique fusion of elements.
He gets the favela vibe right; but it is subtle enough to make it perfect for dancefloor appeal without losing the underground sound while keeping a world-centered sound.
His music blends Middle Eastern music with funk carioca, Brazilian bass with moombahton, Western with Eastern, all of it together, but still sounds very Brazilian.
You can download it for #zeropesos or pay what you can option.

On Aquecimento, we found a mature sound, starting with the catchy TREME, a collab with MC R1.

Then, striking with the title of the EP Aquecimento, a rich middle-eastern moombah-bass.

Ta is the next track, showing why slower BPM stuff like rasterinha, and slower moombahton are the future of the under afro-bass.

And last but not least, Gesto keeping the Brazilian-Eastern Indian vibe at high octane.

if you like any of these genres: World, world fusion, Ragga, latin breaks, baile funk, brazilian, brazilian bass, bass, then this release is just for you. 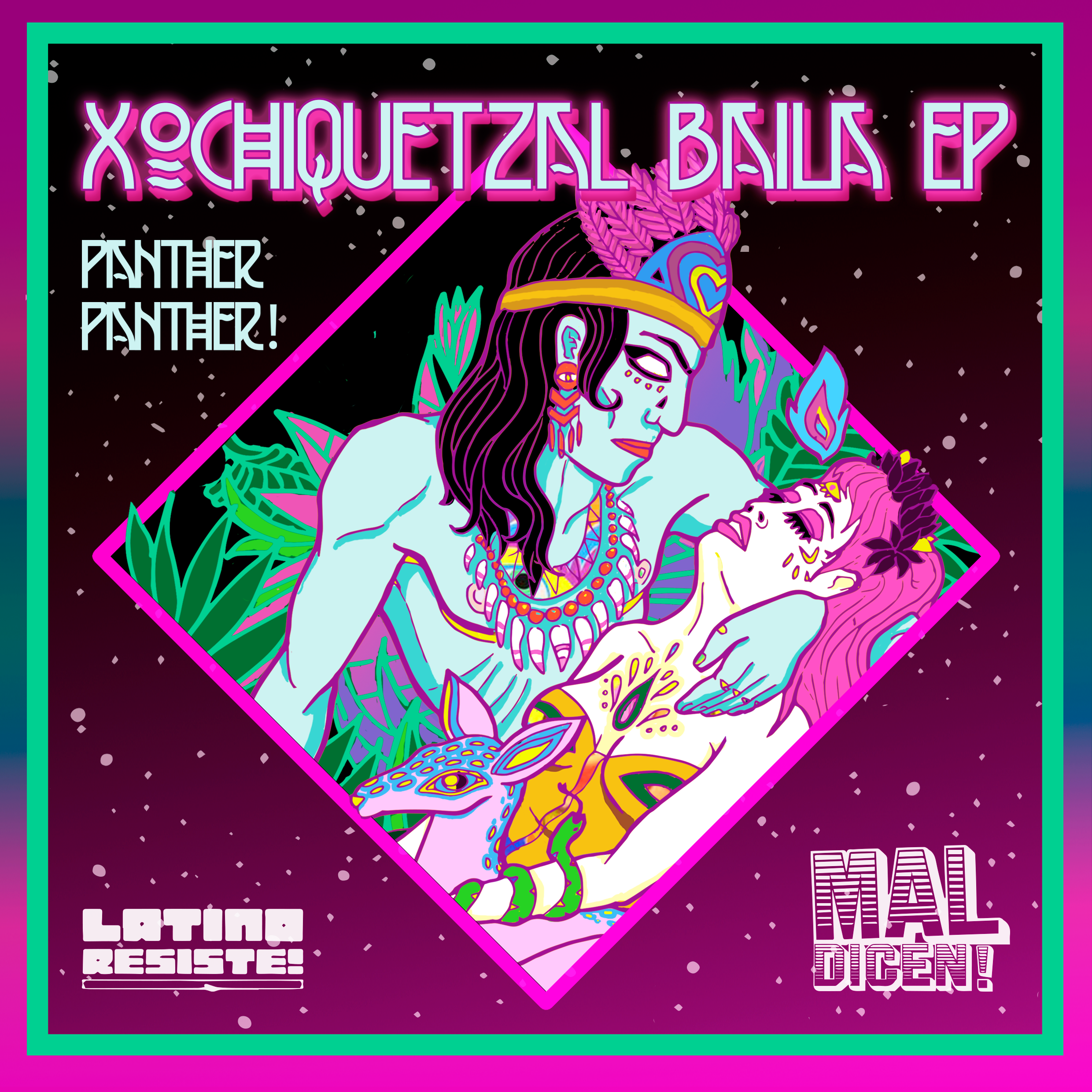 Latino Resiste is very proud to unveil the latest EP from UK/Mexico producer Panther Panther called Xochiquetzal Baila.
For the past years our South American ethnic, indie electronic music has been led by the likes of ZZK, Ana Tijoux, Dengue Dengue Dengue and such. That is why we are very excited to add an impressive release to that category.

Xochiquetzal Baila is a collection of four playful tracks that bring together some of that Mexican Kitsch into your ears through deep bass, tight electronic percussion and trippy melodies, ready for dancefloors in outer space and beyond! Mixing a bit of everything between 80s electro, funk, soukous, grunge and cumbia, this is a journey into cosmic fusion and otherworldliness for hot summer nights and rainy days alike. Hug each other tight as you watch the volcano lovers dance!
ENJOY THE ALBUM FOR PAY WHAT YOU CAN or DOWNLOAD IT FOR #ZEROPESOS

Xochiquetzal Baila and Perdidos are transatlantic collaborations respectively with Buenos Aires producer Don Plok, from the formidable Guateque crew in Zona Sur, and Aranemi, from Latin Bass Records Mexico in Aguascalientes. Both tracks are filled with magic, humour and alien tech wizardry.

Chiquita Brutal is a naughty little number full of grumbly bass and analogue twitches at every turn.

The Black Hole Sun interpretation is made in memory of all those sulky teenage afternoons spent living with the voice of Chris Cornell, may he rest in tropical heaven. All made with global love, for you!

The album was mastered by our brother in arms and super talented Tribilin Sound in Peru, and the awesome psychedelic image depicting the myth of Xochiquetzal was made by Spanish-born, Bristol-based, wonderful illustrator Marta Zu (www.facebook.com/martazubieta)


If you wanna check more of his awesome releases check his own site here:
Panther Panther! is Pablo Villierezz, a culturally hybrid mongrel immigrant from CDMX and Bristol. He is a producer, DJ and live electronica performer promoting tropical bass from Latin America through his music, live analogue performances and the Midnight Ritual, audio-visual parties taking place in his resident city. He has performed all over the world, but soon he will be performing at the Glade Stage during Glastonbury Festival 2017.

Caballo returns to his signature Cumbia Bass sound on a rendition of Cumbia de La Flores for his album LOUD AF.
Enjoy the video in the meantime